1-2 FEET OF FRESHIES FOR MANY AREAS OF THE ROCKIES. SEVERAL FEET ARE POSSIBLE FOR THE SIERRA NEXT WEEK.

Moderate to heavy snow is likely for the Wasatch and the 4 corners Friday-Sunday. Sneak up powder may also occur in the Tetons with some isolated higher amounts possible in northern Colorado.

Light snow will trickle down the Oregon Coast into the Sierra by Friday morning. That system intensifies over Nevada Friday afternoon and slowly moves east over the Wasatch Range. Snow will be falling in the southern Utah mountains initially Friday afternoon before spreading over the Wasatch and Uinta Ranges Friday evening. The American Model points a bullseye directly over the mountain ranges closest to Salt Lake City (The Cottonwoods, Wasatch-Back (Park City, Uinta Range) where the European Model is stubbornly showing less snow with a focus further north near Ogden or Logan. In looking at the NAM 12, NAM 3, HRR, they are more in agreement with the American GFS model. In fact, some of the models show higher amounts further south towards Sundance. I will lean on the GFS for guidance here.

Bottom Line: High confidence for 6-12 inches from Park City through the northern ranges of the Wasatch by mid-Saturday morning. Moderate confidence for 12-16 inches for the Cottonwoods (BCC could overperform due to SW winds initially Friday night). Low confidence for 17-25 inches for the Cottonwoods (It could happen).   With winds initially from the S-SW Sundance or perhaps Deer Valley could overperform on this storm. Winds shift to the SW and eventually NW as the moisture decreases. My gut tells me that LCC may come up short when compared to either Big Cottonwood or some outliers mentioned above. Snow showers continue into Saturday afternoon before ending.

Other spots to watch are a sneak up reverse powder day for Jackson (Snowing on Friday), where light to moderate amounts are likely. In looking at Colorado, the bulk of moisture aims for the southern mountains with 6-12 inches likely in many locations by late Saturday or early Sunday. That system will push north possibly bringing moderate amounts to Steamboat under SW flow. Aspen will be on the cusp of moisture with Crested Butte on some models still fairing pretty well in this storm. On the I-70 corridor, light to moderate amounts of snow will be falling from Saturday morning through Saturday evening (3-5). Bottom Line: Highest amounts in Colorado will be in the southern San Juan Mountains. Moderate amounts might fall over CB or Steamboat. If you're on the I-70 corridor resorts further west are likely to see the highest amounts but it's unlikely that they will be deep.

Below: Steamboat plumes from the University of Utah showing a decent consensus for 6-11 inches of powder on Saturday (Storm ski). This is at upper elevations closer to Buffalo Pass. 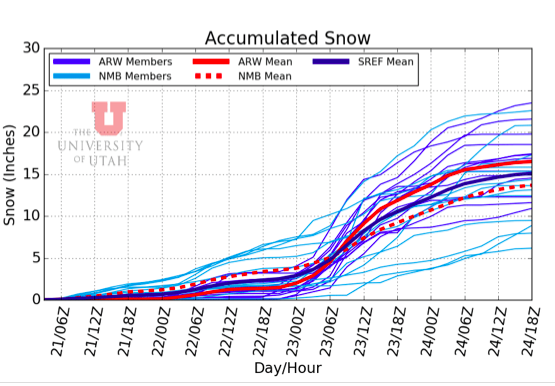 Below: Plumes for Crested Butte show less consensus but solutions from 5-12 inches by late Saturday night. 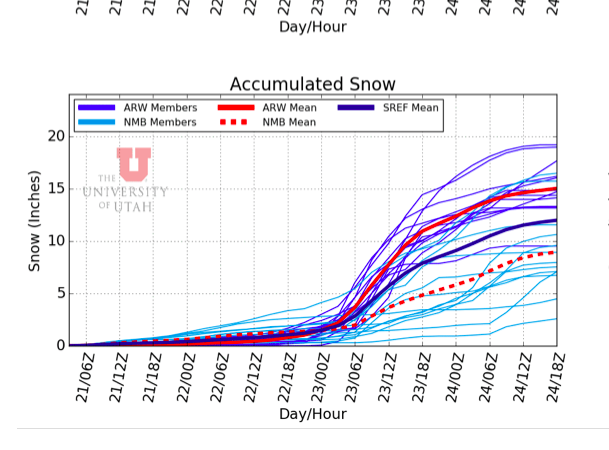 The extended is deep if you want to believe the GFS models.

Pieces of energy from storm #1 head south on Saturday and will sweep through the 4 corners (Including AZ) late Sunday/Monday. Additional light or moderate amounts are possible late this weekend. A more organized trough will drop over the Sierra (Moderate system) and drop south over the Ski Areas near LA early next week. That system picks up some energy from the Baja and sweeps north over the southern mountains of Utah, Colorado, New Mexico north/central Arizona, for Monday night or Tuesday. Some moisture will spread north into the northern Wasatch, but it's not likely to be deep.

Yet, another storm slams into the Sierra and the southern Cascades in the middle of next week. This will be the headliner of the week, with the GFS showing 3-5 feet of snow for the Sierra above 7500 feet, and the Euro showing less (1-2 feet). It's likely that we will be issuing powder alerts for the mid-week period! Stay tuned.

Below: Storm track for the Sierra mid next week. 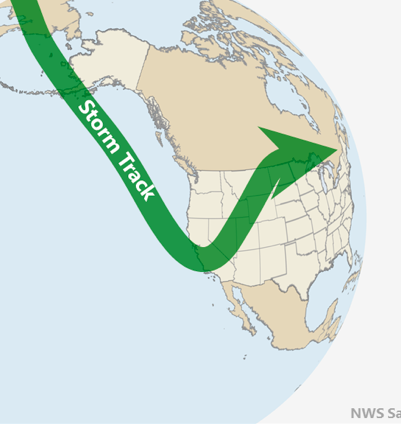 Enjoy the Powder everyone! Remember- Low Tide exists in many areas so chase wisely, and think before you leap into a powder stash of what's below the new snow. Please donate to keep our forecasts going or consider joining the powder concierge. Also, follow our forecaster @lstone84 on instagram to see where we've been chasing!