Please check out our Concierge service if you want to chase powder this season.  https://powderchasers.com/concierge

We  are watching 2 systems. The first looks very deep for the Front Range Metro areas, I-70 to the Divide, with less to the west. The 2nd system finally provides pow to the Pacific Northwest and lands a deep dump in the Sierra. That system will take a southern route over the 4 corners with several feet but eventually push north into the Wasatch, and most of Colorado late this week. The Tetons and areas north will see lower amounts.

Models are all in agreement (High confidence) of a significant storm for the Front Range near Denver Monday night into Tuesday morning. Originally as I mentioned the Euro had most of the moisture in Weld County with the GFS further south.  Currently, moisture is likely to impact areas from I-70 north (Perhaps even further south to Castle Rock).  My only caution is there appears to be a skunk hole over most of Summit County with the majority of snow falling north or east. I may be wrong here!  Summit may end up with light or moderate amounts.  Upslope storms are tricky.  One good thing is the winds may stay more northerly further west versus NE on the Plains.  That might help the Divide resorts.

Below: The Euro showing the majority of snowfall impacting the eastern plains of Colorado Tuesday morning (Pink) with much less over Summit County.  There is snow even moderate amounts showing up for areas further west including Telluride, Aspen, and perhaps Eagle County.  Most areas in Colorado will see 4-7 inches with higher amounts towards the Divide or east.

The big news is in the Sierra where mixed rain/snow fell at most bases in the past 24 hours with snow continuing into midday Monday. Another 4-8 inches is likely on Monday favoring the northern areas near the Lake.  Here are a few reports from this morning. Sierra Cement!  This is exactly what they needed. Most resorts have picked up 50 plus inches in the past week. Another 2-3 feet will fall this weekend!

Looking for chasing powder this week?

If you're in the Sierra aim to ride higher terrain if you can find a resort that opens the summit. Otherwise, it may not be worth a chase.

The best odds of some moderate snow will happen today in the Tetons (Not overly moist- but a light to moderate refresh guaranteed) and perhaps southern Colorado for Thursday.  Some light to moderate snow will likely occur in Colorado Wednesday night into Thursday.  The Euro is the most bullish at 3-7 inches for Telluride with the American model (GFS) showing less.  Some lighter amounts are likely further east towards Wolf Creek or south towards Purgatory.  The highest amounts in Colorado for Thursday may end up being in the La Salle Range near Moab (5-10) on Thursday.

The Northwest is finally showing up on our radar this morning. Light or moderate snow is likely by Wednesday favoring the north Cascades above 5,000 feet (moderate amounts possible at the summit of Mount Baker).

The extended may offer better chases for the Sierra and the northern Rockies.

A strong low-pressure system will enter California by Friday.  That system will bring significant snowfall to most of the Sierra Range through Saturday (2-3 feet of fairly dense snow).  It will be slightly cooler than the current system with snow levels running around 6K feet.  Wet snow will be falling at most ski areas with significant amounts likely. Much less snow will fall at the bases.

Below: Total Precipitation (Water) in a 48 hour period ending Sunday morning (3-4 inches of moisture favoring northern areas).  This may correlate to 20-30 inches of wet snow at mid or upper elevations. The snow level will meander between 5500-6500 feet (Lower than the current system). 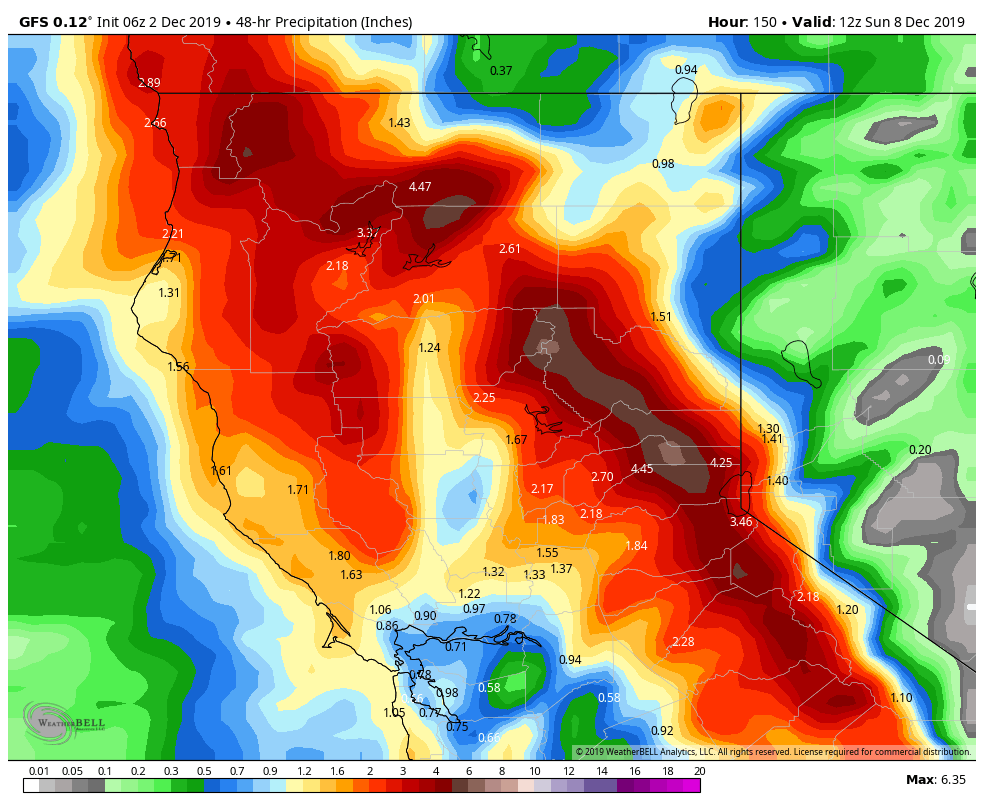 A separate system hung up in the Pacific Northwest (Light or moderate snow late this week) will take a northern track over Idaho and Wyoming by Friday night.  Moderate snow is likely for the Tetons with perhaps decent powder by late Saturday or early Sunday (Early low confident predictions are 5-10 inches)

The CA system moves east (Weakening) late this weekend impacting Utah and Colorado with some moderate snow to many areas. I'm thinking that 4-8 inch range for perhaps the Wasatch or most of central Colorado.  Its really too far out to say with certainty, but some snow is on the horizon for the weekend ahead in the Rockies.

Below:  Ensembles showing the trough entering the west late this week impacting the PNW and Sierra initially. 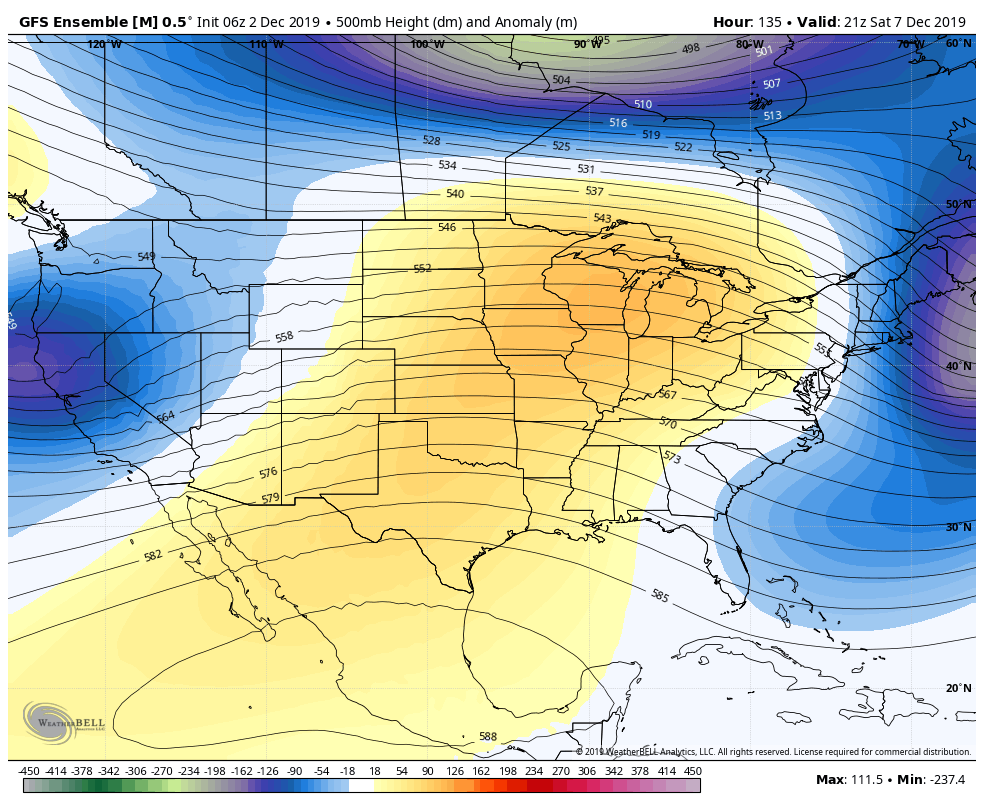 Beyond next weekend there will be high pressure initially with some weak signals of some troughs for the Rockies beginning again late that week.  The Euro shows a good chance of some systems moving in for BC, PNW, and the northern Rockies late in the period around December 12th.