7 Day Powder Forecast- Getting Deeper in the Cascades especially next week!

The northern pattern of snowfall impacting the Northwest will continue albeit with lighter amounts into early next week. Colorado grabs a southern and central mountain storm Monday-Tuesday. The Pacific Northwest and the Idaho Panhandle get deep next week.

If you want to chase powder this season and book reservations well in advance of a storm, check out our Powder Concierge program. We are always looking out 7-14 days. Also, chasing powder requires good tires (We prefer snow specific) and Powderchasers has teamed up with Tire Rack for some packages for your car here. Check them out! They also are a supporter of our forecasts.

It's Friday morning and Mount Baker is going to spin their lifts for the first time this season for local passholders only! They are opening with around a 30-50 inch base and 2-3 feet in the past week. 6 inches fell last night. It will be "Point it straight" no bumps, deep medium or slightly heavier pow. Please comment on this post if you were there!

Snow will continue in the northern Cascades near Mt Baker albeit light until late Friday afternoon. If this was mid season and the Canada border were open, we would keep a close look on Canada with areas around Whistler likely seeing moderate snowfall on Sunday night with a stronger system due for late Tuesday. Meanwhile in the US snowfall will be prominent in the Cascades again Sunday night into Monday. This is a fast moving system that is likely to bring 3-6 inches of powder favoring the central and southern Cascades of Washington and most of Oregon. Bottom Line: Chase worthy powder today in the northern Cascades with a cool and semi wet pattern continuing late this weekend for the Cascades and BC. Both Monday and again Wednesday and Thursday will be powder days in the PNW. Turkey Pow is possible.

Finally, Colorado is back in the spotlight with models in decent agreement of a moderate system arriving for Monday AM to early Tuesday. The models point to perhaps double digits for the highest peaks of the Southern San Juan Range. Warm temperatures will keep most snow confined to the upper elevation resorts and above 9,000 feet. This will significantly limit amounts at lower elevations. The central mountains along I-70 will also see some snowfall especially further west towards Eagle or Pitkin Counties, Overall, with the warm temps, Its possible only 2-4 inches fall at base and mid elevations, but in some isolated higher peaks especially in the San Juan Range 5-10 inches of wet snow might be possible. Bottom Line: Deserves watching but the temps don't impress us.

Below: Colorado will see snowfall begin Monday and end late PM or early Tuesday. The amounts show here might be a bit overdone for the ski areas due to warm temps. The higher numbers might be seen above 9500 feet. 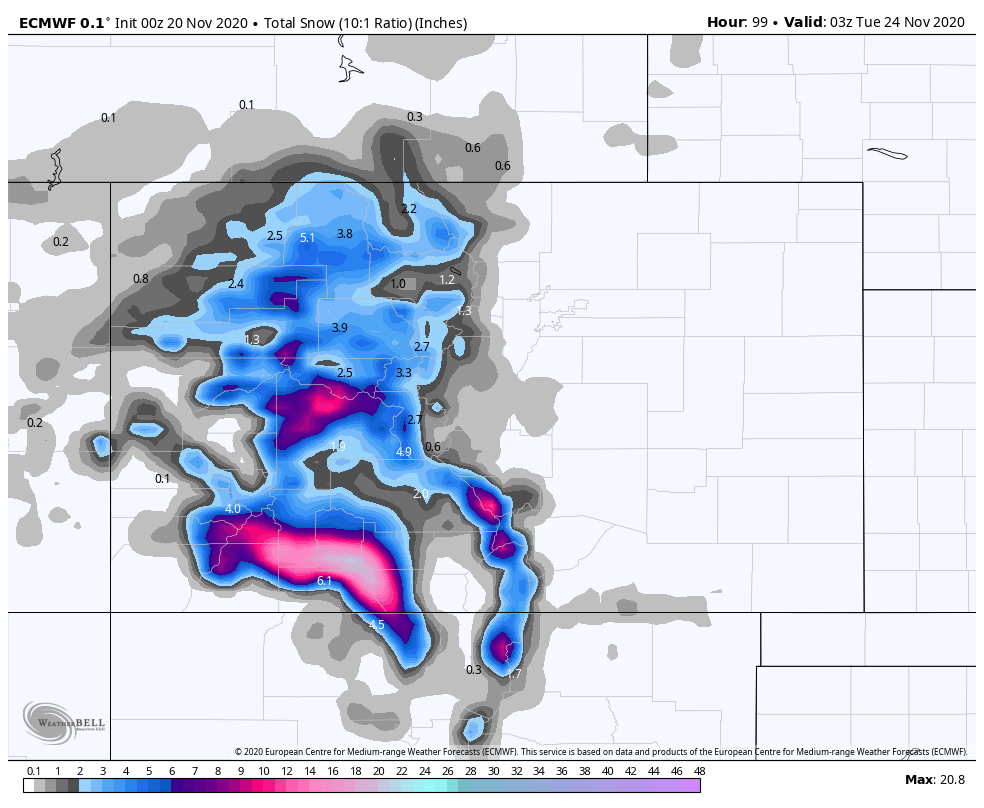 Below: Temps at 10K feet are only in the -3C range during the early week storm in Colorado. Colder further north. Snowfall amounts will be lower due poor ratios. What does fall will be wet but good for the bases. 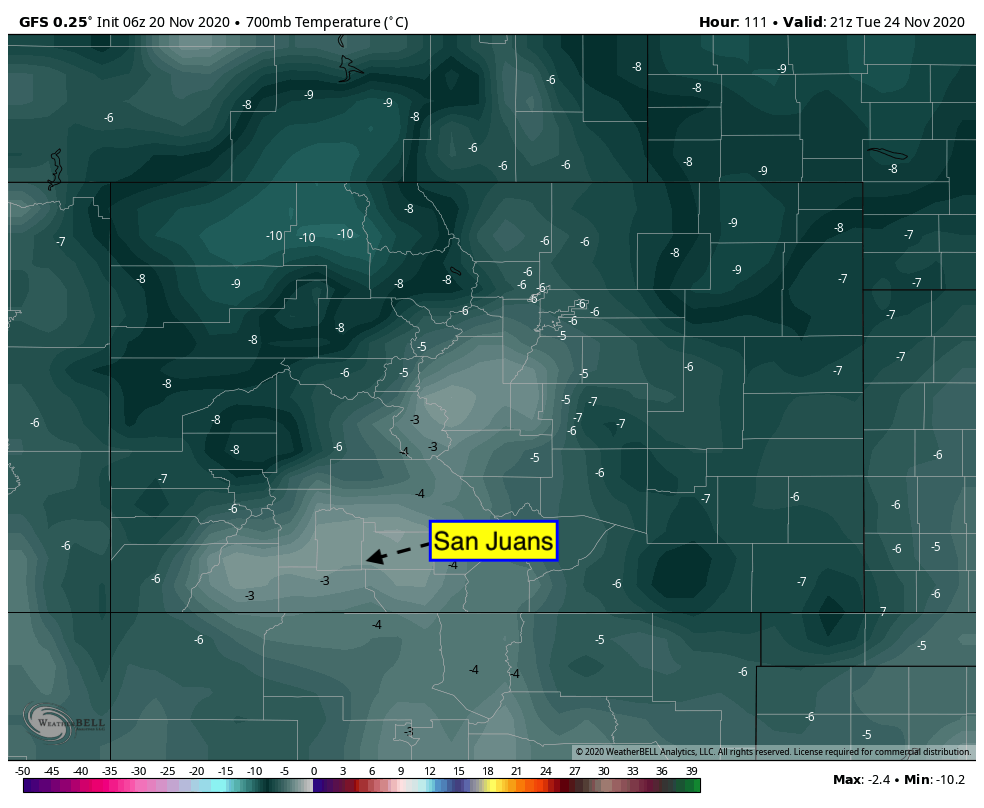 In the extended forecast, a stronger low-pressure system enters Vancouver island by Tuesday. This will bring a decent system to Whistler for some deep powder likely late Tuesday and Wednesday (2 Feet). Interior BC will get the leftovers (Moderate amounts).

Below: Pretty high confidence for a nice dump for coastal BC, and the north-central Washington Cascades mid-next week. Respectable amounts also will be falling further south and in the Idaho Pandhandle. 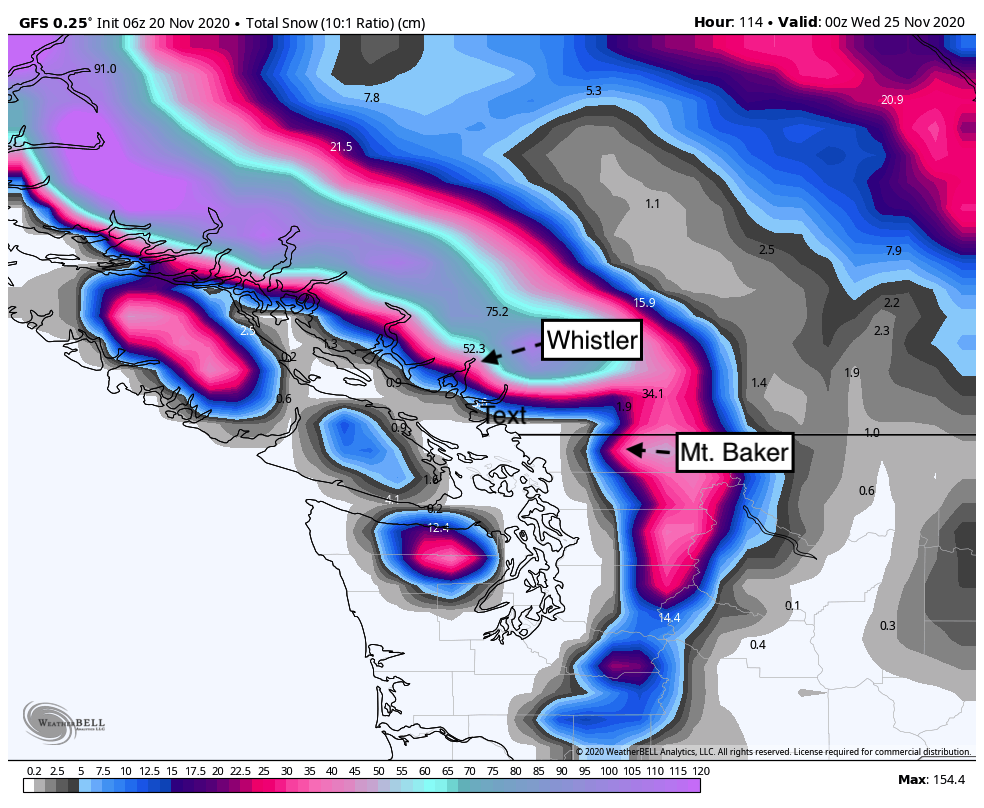 The Cascades of Washington, Oregon as well as the interior Panhandle of northern Idaho will also reap some rewards next week. The models show an excess of a foot of snow for these areas. Further south, moderate to heavy snow is also likely for the central Washington Cascades near Stevens Pass. The Epic Pass goes up $100 on November 22nd. Stevens is due to open on December 4th.

Its likely between the Monday (Light to moderate) and midweek storm (Moderate or heavy) next week some ski areas in the northern PNW will be reporting 12-20 inches new in the 3 day period through Turkey Day. Further south will see lower amounts, however still respectable from Crystal into most of Oregon (9-15). Bottom Line: Moderate storm Monday for the Cascades with a better system due midweek. The models are still too far out to accurately predict amounts. Temps appear cold enough for decent quality.

For the Rockies, some of this moisture will filter into the intermountain west. Decent confidence for a wide area of the Idaho Panhandle to be deep next week, with moderate confidence of chaseable amounts near Glacier National Park, Whitefish, and areas east and south early next week. Lower confidence for any appreciable amounts further south in the Rockies.