POWDER ALERT- 1-2 FEET FOR NORTH/CENTRAL MONTANA, SOUTHERN COLORADO AND THE FIRST SNOW FOR THE SIERRA.

2 storms will impact the west this weekend with many ski areas seeing snowfall. The highlights for 1-2 feet of powder may be isolated to north central Montana and perhaps Southern Colorado. The Sierra is a wildcard with 1 model showing 12 inches for many ski areas and another in the 3-8 inch range. There is some model discrepancy on these storms.

If you love powder and own a business, or know someone that does, please email us powderchasers1@gmail.com. We would love to discuss what a partnership would look like with you. Please considering signing up for the Powder Concierge as well. With the crazy and inconsistent restrictions implemented at resorts for the upcoming season, it will be more important than ever to be at the mountain when there's fresh snow. We can definitely help you make that happen. You can read more about it here. Back to the snow.

This is an exciting forecast since many areas of the west will see snowfall this upcoming weekend. Reno may see some flakes by Sunday where no precipitation has fallen since the end of August. The Cascades of Washington feel the impacts late Thursday-Friday with the highest amounts up north near Mount Baker (4-7 inches above 6,000 feet). Temps cool Thursday night with light snow at the base. That system will also bring some light snow to the southern Cascades of Washington and a wide area of Oregon.

The Sierra is finally on the map with it's first widespread snowfall event. The models show the first trough blasting through Friday with light snow likely above 7500 feet. A second and more potent system will move over the Sierra Saturday night bringing another round of snow for Sunday. The GFS and the EURO are not in agreement. The GFS has a generalized widespread event for an additional 5-10 inches on the Sierra Crest (Upper elevations of many of the Tahoe Ski areas). The Euro seems to isolate any deeper totals to the northern part of the lake, perhaps Squaw or Sugar Bowl with much less further south. While this is not gong to be an epic event, the take away is that most Ski Areas in the Sierra will see a generalized moderate event adding some hype to the upcoming season with 2 fast moving systems this weekend. While the general totals may not exceed 4-7 inches at many areas, it's possible some isolated pockets of 12 plus could be in the cards for Sunday morning.

Below: The optimistic model (GFS) showing a wide area of snow totals through late Sunday of 10 inches along the Sierra Crest (West of the Lake). The Euro is less optimistic showing only isolated areas of 10 plus inches further north towards I-80. These totals are the combination of both the light system for Friday and the stronger system late Saturday night. 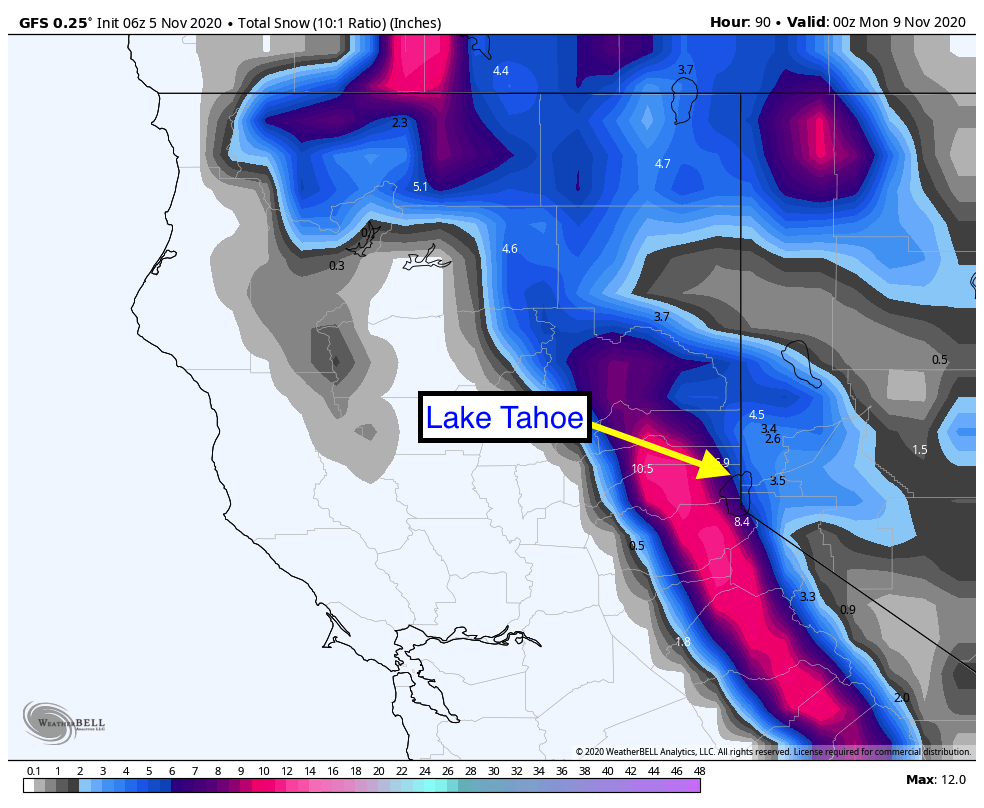 In the Rockies, the highest snowfall totals (1-2 feet) are likely to land in northern Montana near Glacier National Park and areas just south (Central Montana). The peak will be Saturday late AM to early Sunday. The models snow a good chance for moderate amounts for both Big Sky and Bridger Bowl. Bridger may see higher amounts. The Tetons will see impacts Sunday on the light or moderate side. For Utah, amounts may end in the 5-10 inch range for the upper Cottonwoods by mid Sunday. Winds are S or SW so Big Cottonwood (Solitude or Brighton), the Uinta Range, and even Snowbasin, or Deer Valley could come up with some surprises.

Below: Total snowfall through late Monday. High confidence of significant snow for northern Montana along the Continental Divide extending south into the central portions of the State. Snow will also be falling at both Bridger and Big Sky this weekend, extending into the Tetons and Wasatch. 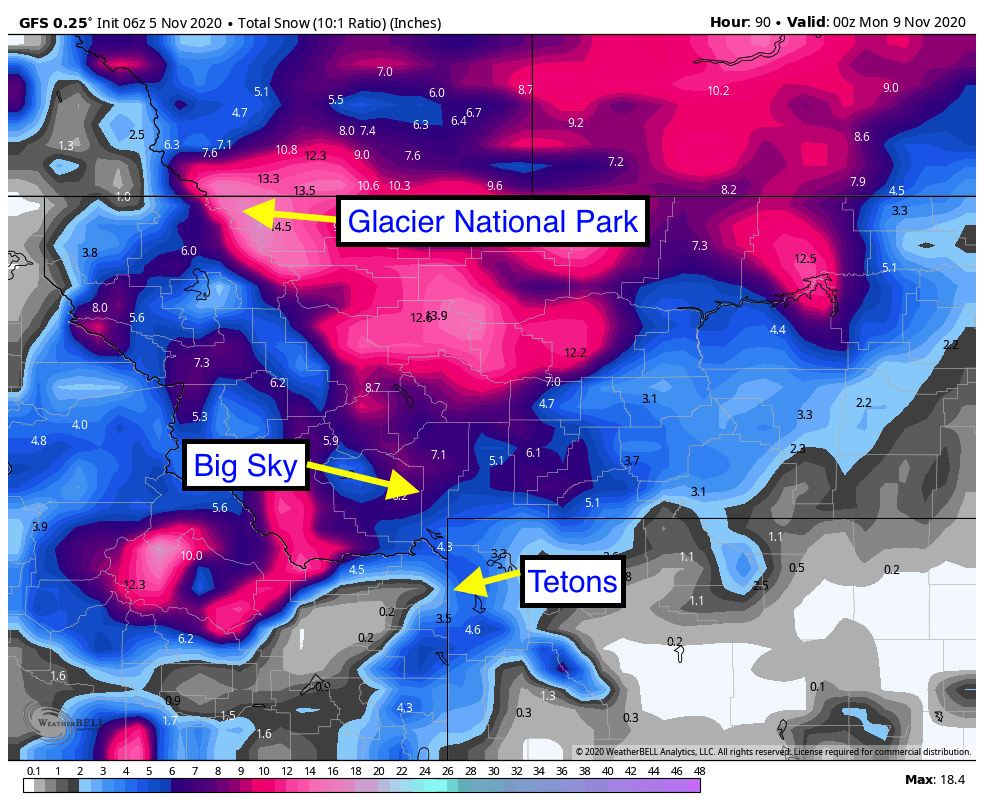 The models have been consistent for Colorado for several days. The low pressure system takes aim at the San Juan range by Sunday morning. Its possible that Wolf Creek grabs 10-20 inches by Monday morning with the bulk of precipitation falling Sunday AM to early Monday. The models also show significant snow pushing north into Lake County, Hinsdale with Silverton as a strong wildcard. Light or moderate snow may edge into Telluride (Not a favorable wind direction), Crested Butte, and Aspen. Lighter amounts are likely further north or East towards I-70. Temps with this system are not overly cold, so with lower snow ratios amounts are no likely to be significant with the exception of some areas of the Southern San Juan Range (Could provide decent base building).

Below: Southern San Juan Range highlighted for heavy snowfall Sunday/Monday. Moderate amounts likely for some isolated areas of the Wasatch and Uinta Range above 8,000 feet. 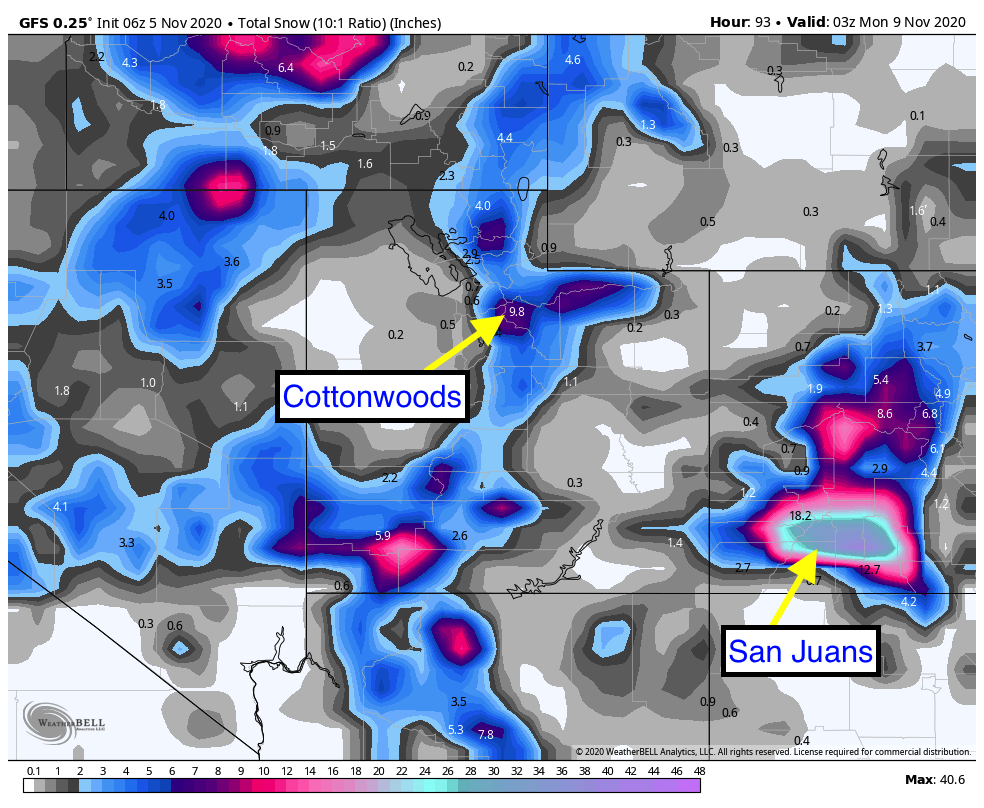 An additional light or moderate system is due for the Rockies mid next week with a hint of a stronger and colder system moving into the Pacific Northwest late next week.