There are opportunities to chase powder this week, especially in New England by Thursday and perhaps the northern Rockies by Friday and Saturday. The PNW will also do well later this week, and the interior areas of BC that really could use some powder. You could chase from BC to to Montana and eventually grab pow in Wyoming and northern Colorado. There is no single deep double digit event, but the sum totals later this week in the Rockies could be decent especially Friday or Saturday.  Expect double digits for New England by Thursday morning.

Quite the contrast to last week where deep AR moisture coming in from the central pacific has now evolved to a northerly push of cold air and moisture stretching into Canada pushing due south over the northern Rockies and PNW. light snow has teased the ski areas of Colorado and Utah over the past few days producing feathers with cold temps preserving the goods. If you are chasing powder this week, focus on BC, northern or central PNW, or the northern Rockies and New England.

Light snow will tease the Rockies midweek and increase by Thursday over BC producing decent amounts of snow for the Powder Highway (5-10) by Friday. The PNW grabs moderate snow from Thursday to Friday under N, or NW flow. This should keep the highest totals slowly building (No single double-digit dump) late this week, especially over Stevens Pass and perhaps Mt Baker or east towards the interior.  Northerly winds might keep totals a bit less at Baker which normally does well with SW winds that funnel moisture into the Ski Area (Wildcard). This storm will also fare well for Montana which has been bypassed on much of the past several storms (Whitefish, MT Snowbowl, GNP, extending south to Bridger and Big Sky and perhaps even Red Lodge Mountain late week). The central panhandle of Idaho will also score decent totals late this week.  Peak periods seem to be Thursday and again Friday (2 moderate events). Chases: Revy, North-Central Montana, Central panhandle of Idaho, north-central Cascades, and even Big Sky or Bridger by Friday.

Elsewhere, moisture skirts north of the Wasatch (Light snow) over the Tetons for Friday and Saturday (5-10). In Colorado teasing light snow midweek increases by Friday and Saturday over the northern mountains. While there is no single deep event for Colorado, areas north of I-70 including RMNP, Grand County (WP), Steamboat, and Rabbit Ears Pass could end up with weekly totals in the 5-11 inch range over several periods of light snow increasing a bit Friday and Saturday.  Chases: Tetons, Steamboat (Wildcard), RMNP, Winter Park.

Below: Total snowfall from Wednesday to Saturday with peak periods Thursday-Friday in the north and Friday-Saturday further south in Wyoming. This storm will bring light or moderate snow to Utah as well with the bulk of moisture hitting Idaho, Montana, Wyoming and perhaps northern Colorado mid to late this week. 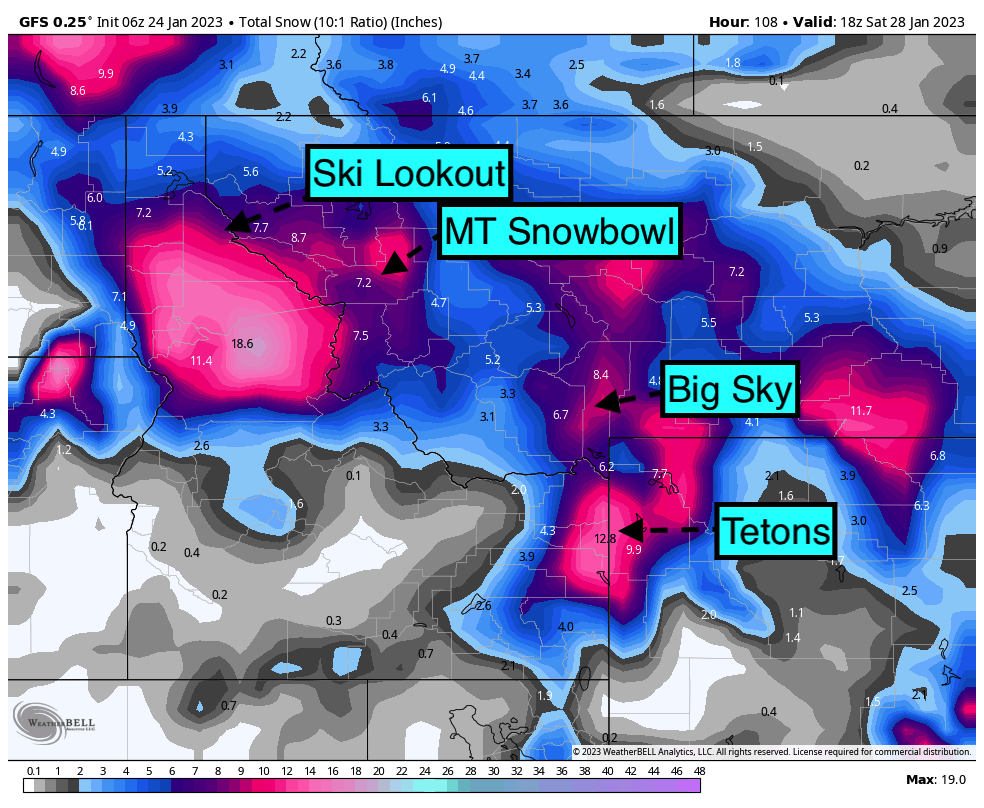 Below: Total Precipitation through Friday is decent for the northern and central Cascades of Washington this week. Northerly winds might reduce totals a bit for the Ski areas as winds veer more northerly versus having some westerly component.  Winds start from the NW and veer north by late this week. Mt Baker seems deep on these models but the highest totals might fall just east of the Ski Area. Stevens Pass will likely see a moderate event late this week with less snow for Crystal or areas south. Peak periods will be Thursday PM to Friday. 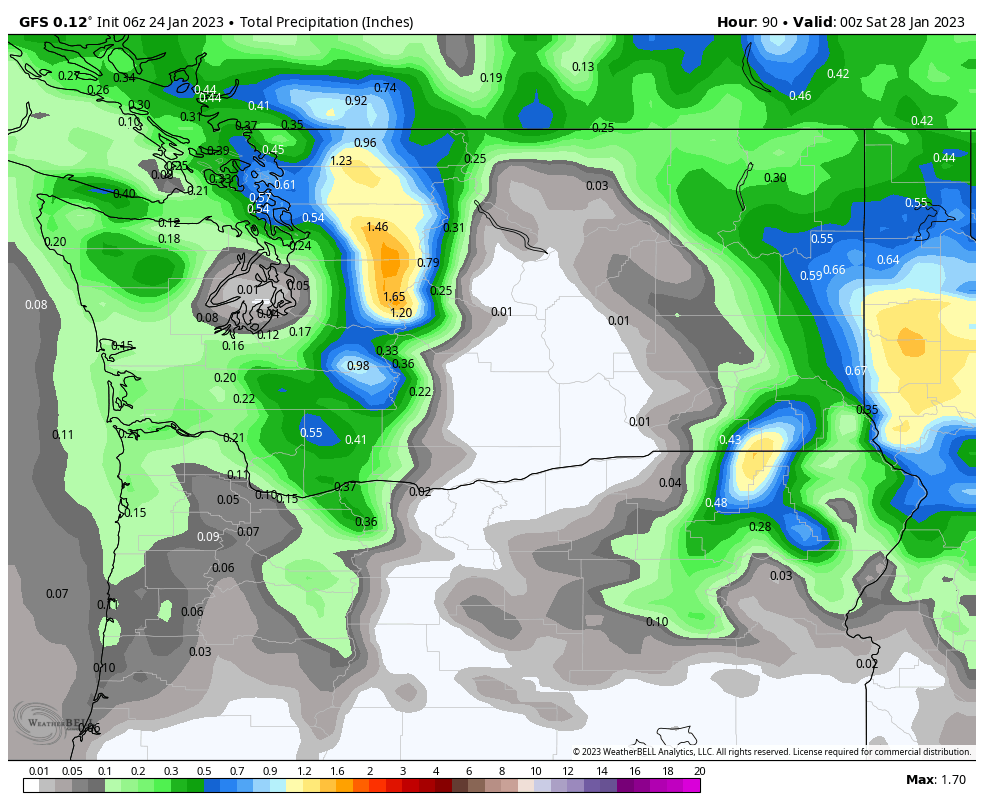 Below: Total snowfall for the west through Sunday favoring the northern Rockies and PNW. 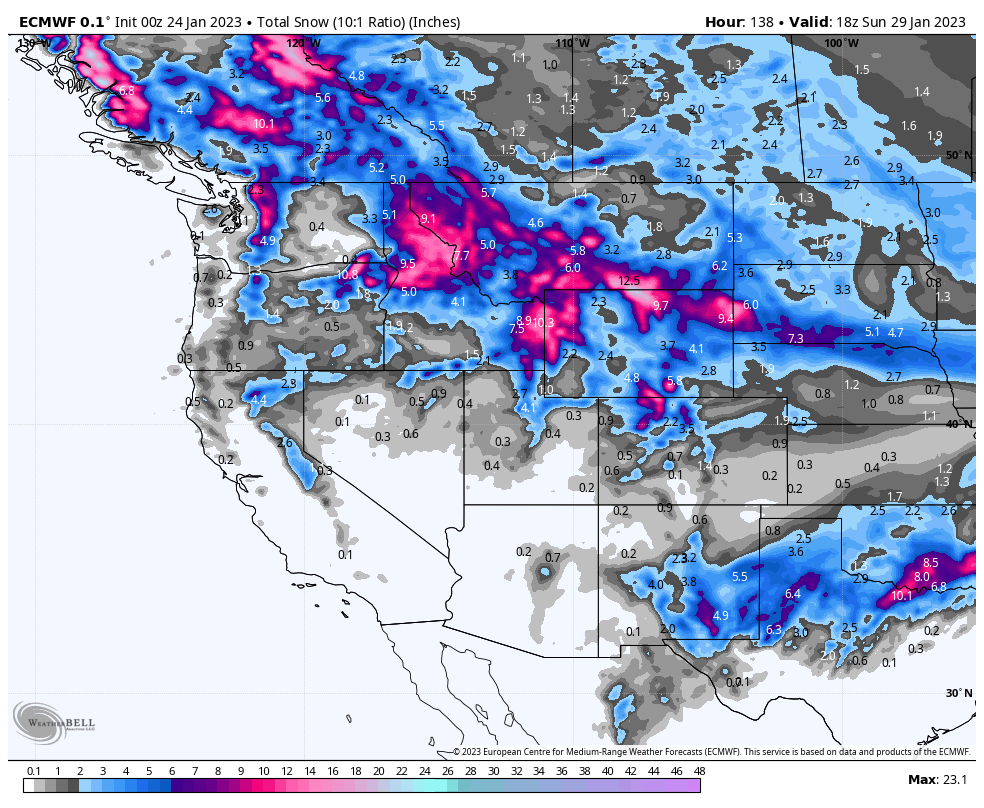 Finally, for New England storm #2 brings decent totals to most of the Ski Areas favoring the central regions of Vermont, New Hampshire, Maine, and areas north into Canada with a warming trend.

Below: Peak moisture occurs later Wednesday into Thursday with 12 plus inches noted for many locations in New England. Good timing for some deep Thursday Pow. Caveat: This storm starts out cold Wednesday and finishes warm for Thursday. Surfy conditions are likely with some sleet noted towards the coast or southern locations. Ride inland or north.

Another low-pressure trough is appearing on the models for the Tuesday to Wednesday timeframe next week (January 31-February 1st) taking a similar northerly route, however, it seems to dig a bit further south. The Deterministic models which have low confidence 7 days out are picking up on a better event for Utah, but a continued emphasis on the northern Rockies including BC.

Below: Storm #2 enters the northern Rockies mid-next week which might push a bit further west into Utah than the proceeding storm this week. Interior BC will also continue to reap some rewards with much-needed snow. 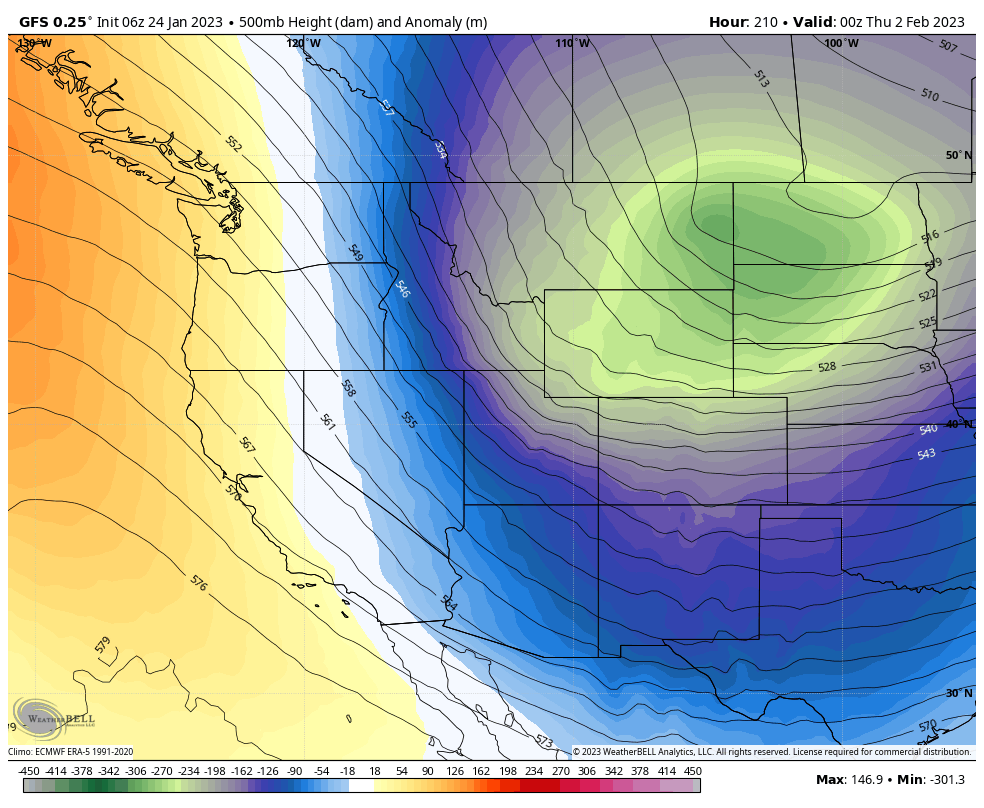 Beyond the middle of next week's system, there appears to be a break in the action with the long-range ensembles bringing signals of weak or moderate systems favoring the northern Rockies in the February 5-7th range. I have lower confidence for the Sierra and areas south.

Below: Looking further afield into the week of February 6th there is a trend for some low pressure (Weak signals at this point) to favor northern areas or the PNW after a break in the action late next week. 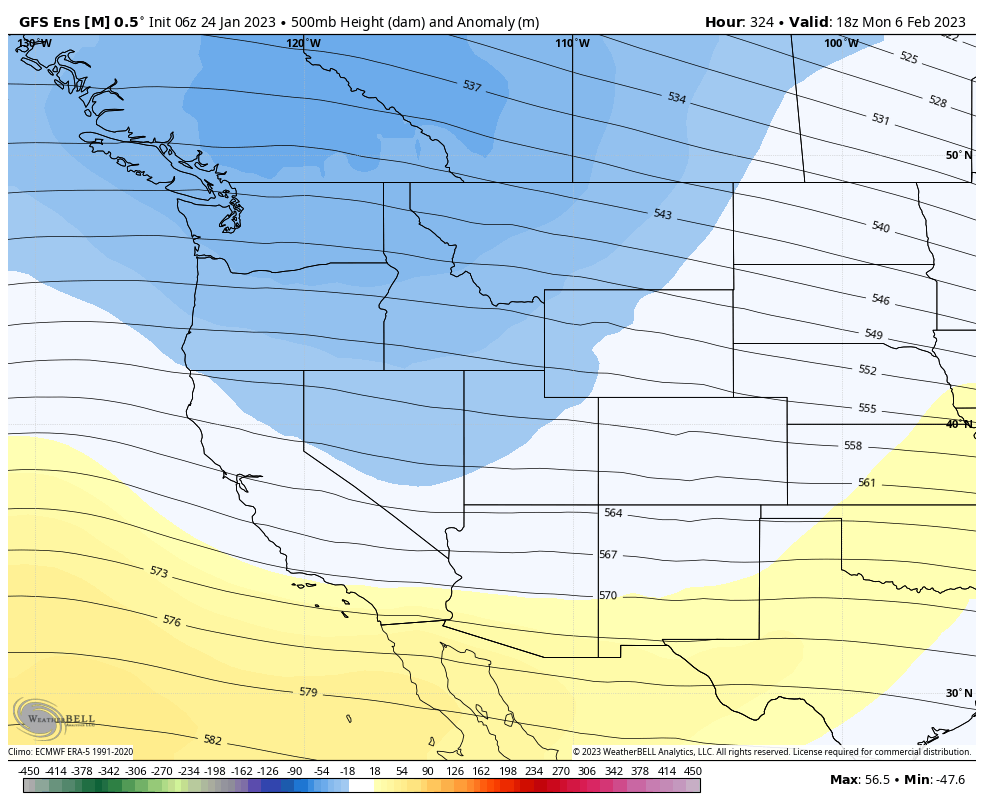 Announcement:  Powderchasers has an introductory SWAG store (Initial roll out) with some great pricing on high quality US made beanies and sweatshirts. This store will be expanded in the future but we are offering pre release pricing on some great items. Please check out our Swag store to support us and you won't be disappointed with the quality. https://powderchasers.com/store

Congratulations to Mikaela Shiffrin for breaking Lindsey Vonn's World Cup Skiing record! That is HUGE! Maybe there will be a parade through Vail Village to celebrate!